I came across this band, like many of the artists I’ve been talking with recently, while curating songs for the QuaranTUNES Playlists. Their upbeat, yet smooth sound, really spoke to me.

This episode of the Indie Artist Spotlight features 3 tracks from Hip Bobsha. A brief description of each, provided by the band, is listed below. My commentary can be found in the podcast recording, between tracks.

The Rope Climber
I wrote the lyrics while I was watching students take their MCAS exam. It just seemed so absurd how they were all herded into the library like cattle to take a test that I don’t believe really measures much anyway. We have to be able to do better than this.

The Wellspring
This is a song I wrote back around 2008 about world events, the winners and losers of war, etc. It’s also about how we take things for granted and don’t realize what we value until it’s gone.

Evenings of Sound
I wrote the lyrics to The after watching Dead Poets Society. I had never seen the movie and it really blew me away. It was a stormy day and so that was the kind of mood that I guess I was trying to capture. The song isn’t really about the movie at all. It’s written more from the perspective of a person being besieged by war, in whatever form that might take.

You can find links to listen to Hip Bobsha , as well as links to their social accounts, on their website here: https://hipbobsha.com/music

You can also listen to these tracks, as well as the other tracks that have been featured here, on the Indie Artist Spotlight playlist on Spotify. 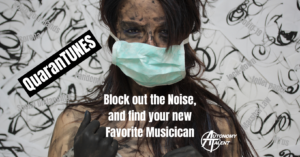